COLOR tip of the day

Here’s a very Springtime color scheme. It’s called a Split Complimentary, which is a great set of colors and a very handy thing to know about.

You’ve probably heard of the Complimentary color scheme. This happens when you have 2 colors that are opposite each other on a color wheel. They are also called opposite color schemes. This is one of the most common color schemes around; Red & Green for Christmas; Yellow & Purple, or Blue & Orange, for Sports teams.

If you take one of the colors in a complimentary set, and SPLIT it into the colors on each side of it on the color wheel, you will get the split complimentary color scheme. For instance, split orange into red-orange and yellow-orange and then combine with the blue (opposite to orange). That’s a more interesting set of colors, yet it has a similar appeal with a lot of contrast.

Here’s what happens when you take Magenta and Green, and then split the green into yellow-green and blue-green.

Split the green into the two colors on either side (on the color wheel) and you have blue-green with yellow-green.

You can put these 3 colors (along with slight variations), into many versions of a design and they’ll all look pretty good, as shown below. Color schemes are handy, but you can pretty much count on the fact that if you stick with 3 or 4 colors, you’ll land on some kind of color scheme that is workable and has a name to go with it.

So why learn color schemes at all then? The best time to know specifics, is when you are making changes. If you know why something looks good or doesn’t look good, then it’s much easier to make corrections and variations.

Which one is your favorite? Because they all conform to the same Split Complimentary color scheme, it’s hard to choose. They all look good. Note that values have been tweaked to make sure that contrast is good for visibility. 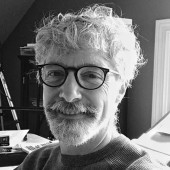 Dennas is the founder of Firstlight Arts Academy in Nashville, and also of The Art Instructor (formerly ArtSquish). He has been designing, painting, illustrating and teaching in various combinations since he learned how to hold a crayon. He is the illustrator of 24 children's books with over 5 million in print worldwide. See his paintings at http://dennasd.com